APPI of Opa-Locka, Florida is a manufacturer of specialty metal components. Due to the nature of their business, the concrete floors are susceptible to wear and impact often associated with warehouse and machine shop floors, but also vulnerable to corrosive attack from chemicals used in the production and treatment line. 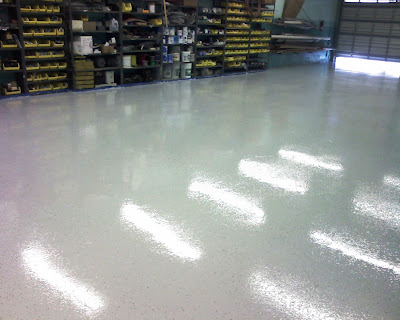 APPI needed to a floor coating to aesthetically restore and beautify the floor being that many clients visit the operation, while at the same time, the floor coating had to be high performance enough to resist abuse and properly seal and protect the concrete against corrosives.

APPI sought the advice and consultation of Epoxytec. Epoxytec was summoned to inspect the concrete floors at APPI and conduct a full service concrete coating inspection to help uncover the cause of previous coating failures. After prescribing remedial recommendations, Epoxytec was requested to specify a solution that will last and perform for decades. 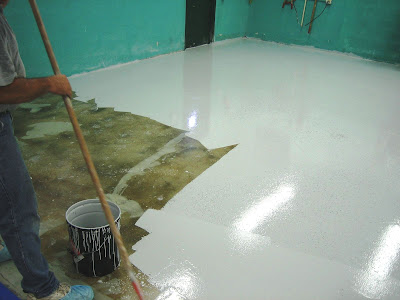 (top-coating over Epoxytec B2 Primer)

Considering the high level of moisture vapor transmission (MVT) and possible logistical errors of timing between priming and recoating made in past installations of coatings, Epoxytec recommended utilizing Epoxytec B2 Primer. The B2 Primer is a recoat color indicating, water born epoxy primer.

The advantages of having a color indicating primer will provide the applicator, in this case the in-house maintenance personnel (utilizing Epoxytec DIY support), with zero logistical timing errors. The applicator does not have to calculate nor time the recoat or topcoat window, instead, the applicator will simply be able to topcoat the primer when the color changes. As the color of the B2 Primer changes from grey to clear – it is ready for top coating!

The second advantage of using water-based epoxy primers, such as the B2 Primer, is its effectiveness in combating high levels of moisture or humidity, especially in concrete floors experiencing debilitating moisture vapor transmission. Most solvent based, or other solid resin based epoxy or urethane primers/coatings cannot effectively bond when moisture or vapor transmission is present in high concentration within concrete. They simple weaken the bond, prevent a good wetting anchor, and ultimately delamination occurs as the curing takes place or later in the service life.

For many typical epoxies, water equals hardship in bonding. However, being the the B2 Primer is made from water, there are no adverse effects to the primer coating during or after the application. In fact, any time Epoxytec suspects moisture may be a concern, leaning to the B2 Primer is protocol, and is recommended as a tool in all flooring contractor’s tool box. 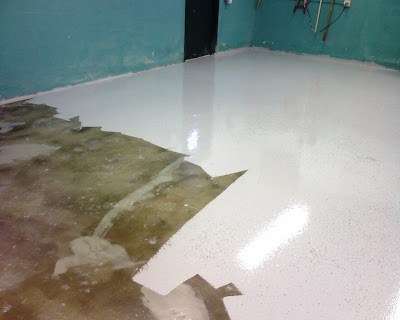 After the B2 Primer cures, an top coat must be applied within the 48 hour recoat window. APPI selected the Epoxytec SLF top coat. SLF is a urethane-modified-epoxy (UME) top coat system. 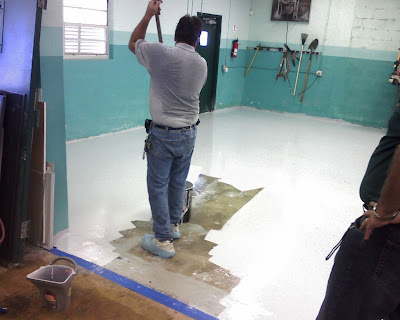 The Epoxytec SLF system is easy-to-use, 100% solid high gloss epoxy. With the urethane modification, it makes it also impact tolerant. The high gloss system is beautiful, yet resilient and durable, holding up to most chemical attack and wear. The system protects the concrete, yet remains practical and easy to clean. 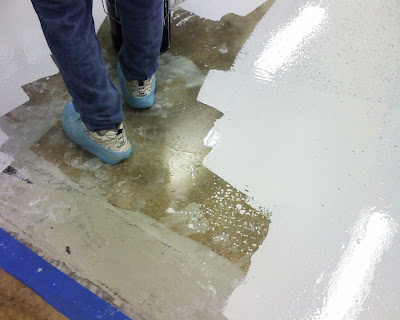 As you can observe in this picture, the coating is applied at a decent thickness per coat – circa 10 – 15 mils. 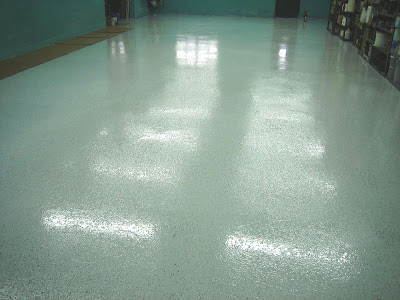 APPI for safety reason and preference, decided on the addition of color flakes. Broadcasted on top the final coat, while wet – tacky (before the product cures), provided an orange-peel finish, which increases the coefficient of friction making is ADA compliant to non-skid regulations.

Epoxytec in fact, not only recommends this system for the benefit of added grip, but also because it hides unintentional scuffs or disparities which often times cannot be avoided. 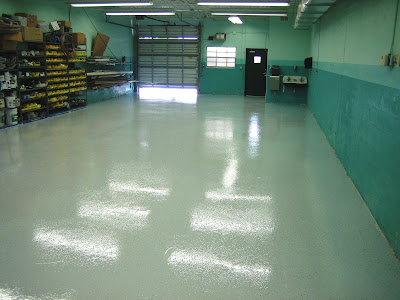 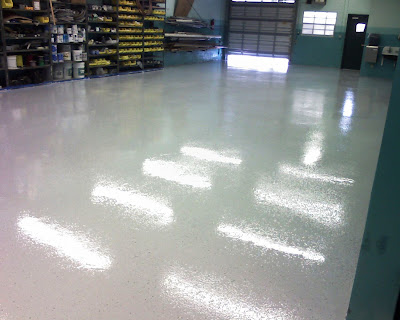