Rehabilitative and protective solutions for the solid waste industry pertaining to corrosion induced by wear and chemical attack due to debris, scrap, refuse, and various solid and liquid waste.

It was with great pleasure to present solutions and services to Wheelabrator South Broward, a Waste Management company. Wheelabrator South Broward requested a solution from Epoxytec to address maintenance related rehabilitative and protective solutions in order to remedy current structural floor concerns in need of repair and apply preventive maintenance measures to combat corrosion and wear with superior materials as an alternative to current traditional methods in order to further extend the life expectancy of Wheelabrator’s structures and assets, which in turn, will increase productivity. 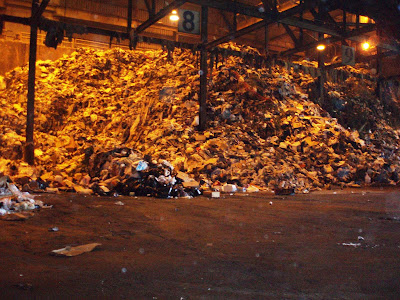 In this case study, Wheelabrator S. Broward was experiencing ultra-high corrosion and loss of concrete at the tipping floor areas of their facility. Tipping floors at the Transfer Station are designed as an area where waste management garbage dump trucks empty municipal solid waste (MSW) into a refuse bunker for consolidation. MSW consists of a variety of unknown corrosives and abusive ruble. Within the matrix of the rubbish, various chemicals and organics are present. This is quite noticeable because of the intensely foul and putrid odors. Most facilities try to aerate the trash stacks, which unintentionally breeds further microbial induced corrosion.

Because the tipping floor is designed as a transfer station, the use of heavy equipment is essential. Bulldozer blades and other heavy mechanical machinery are constantly pushing the collected trash into piles and ultimately into the refuse bunker where it is collected. This method of brute and forceful transfer mechanics causes extreme wear, and the wearing effects are coupled with the abuses of heavy solid trash – mattresses, wood, boulders, heavy metal objects, etc. 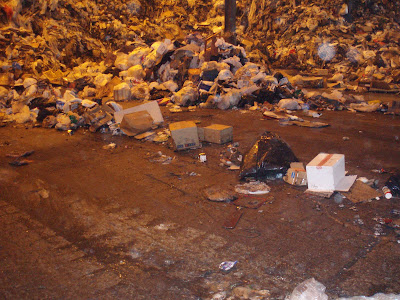 An endless cycle of wear, impact, and abrasion, catalyzed with chemical corrosives results in weakened concrete and accelerated wear at an unprecedented rate. The tipping floor is the source of productivity for waste management processing plants, and loss of time due to slowdowns or temporary shutdowns are a large hindrance on Wheelabrator’s operations. Finding a way to extend the maintenance cycle was imperative, Epoxytec was able to help. 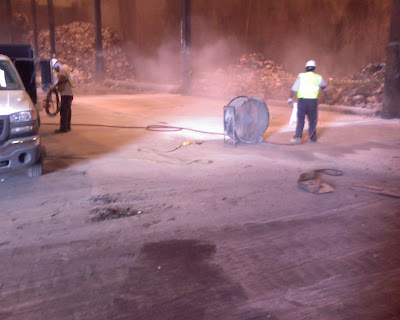 Preparation was necessary to decontaminate and clean the concrete, rid the weakened surface, and expose the substrate for inspection and preparation before application of the new epoxy substrate solution proposed and developed by Epoxytec. 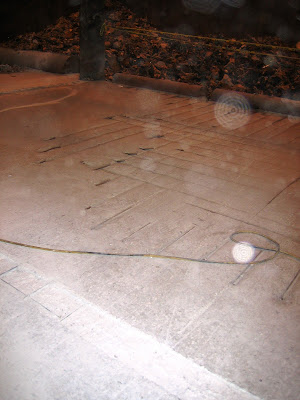 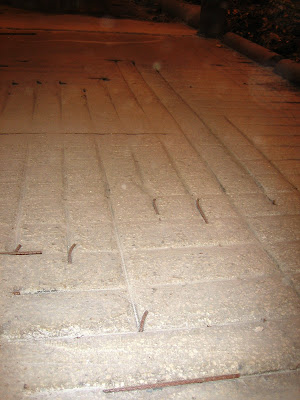 After blasting, the prepared surface revealed an incredible amount of concrete deterioration. The wearing effect of the tipping cycles, and trash transfer to the refuse bunker was so debilitating that original concrete reinforcing bars (rebar) was actually missing.
Epoxytec was called into Wheelabrator South Broward to customize a high performance, sealed and chemical resistant epoxy barrier slab with ultra-high density and compressive strength (17,700psi), and offer superior wear and abrasion resistance.
The caveat was that the material had to be forgiving to the surface and moisture levels always present at the waste collection tipping floor. The product needed to be tolerant to the endless impregnation of contaminants. The system ultimately needed to be simple enough to understand and safe to apply, easy to mobilize with uncomplicated tools and means if needed to be installed in-house. The material also had to have the ability to tie back into itself and be repairable for the future with rapid responsiveness and uncomplicated means of touching-up. 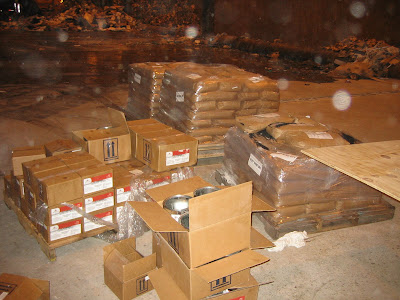 The Epoxytec 17G solution is a structural wear and abrasion resistant material, with an enhanced proprietary granule embedment and optional graphite blending to decrease the coefficient of friction and wear. The material is “green” and environmentally friendly, exhibiting a safe 100% solid formulation (no VOCs, no solvents, no fumes). Using the system provides Wheelabrator an ultra-high build material to combat wear with a quick return-to-service, thus extending the life-expectancy of the floor and improving downtime cycles to provide increased productivity. 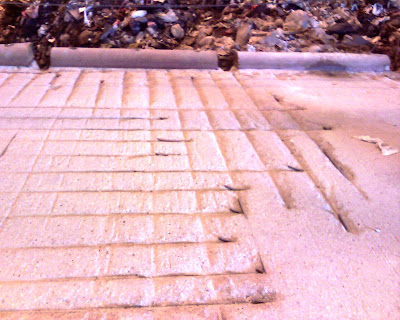 The Type of Abrasion:

Unlike slurry troughs, high velocity pumps, or fine slit abrasion which is typical when trouble-shooting abrasion; Wheelabrator is rather experiencing a “sliding” friction-based abrasive condition with heavy abuse. Wheelabrator’s concrete floors are exposed to a cycle of impact, disposal on top of concrete and then a metal-to-concrete sliding force (also frictional abuse of other materials as well).

This “sliding” abrasive force was the focus of our study, which ultimately helped formulate Epoxytec’s recommendation utilizing 17G.

Fighting abrasion with abrasion-resistant fillers is great when combating a force with a stronger material filler than the opposing force (brute force results).

However, when dealing with sliding abrasion, a unique solution could present itself because of a different opposition – friction, thus a solution to facilitate the sliding effect is often sought. Creating slip (or a less coefficient of friction) ultimately slows down the rate of frictional abrasion or helps eliminate it altogether, hence, less friction/abrasion equals less wear.
High performance material manufacturers consider materials such as Teflon or Graphite to facilitate this process, however in this case – the constant and moist contamination delivered by the unloaded refuse provides enough slip, so a non-porous, sealed epoxy finish was sufficient.
To have solid strength, and also reduce friction (yet, not effecting the traction needed for machinery and vehicles) with a quick return-to-service and offering an easily maintainable system, Epoxytec recommended the development of 17G, a customized silica epoxy slab solution. The system also made economical sense (even with high build) without sacrificing any needed performance properties.

Other Considerations and Indirect Advantages:

Wheelabrator is also experiencing wear due to weakening concrete. As chemicals, water, solvents, and other fluid contaminants saturate the concrete floors, the surface of the mortar is compromised and weakened due to erosion, and chemical and microbial induced corrosion. The aforementioned can even effect higher density/psi concrete because of their vulnerable porosity (Epoxytec often realizes this fact in the wastewater industry as well).

When dozer blades and refuse slide across the surface, a small amount of soft (mush-state) and corroded concrete goes with it; the catalyst of weakening concrete is multiplied by constant daily cycles and contributes to the accelerated wear rate on concrete tipping floors. The original concrete has enough challenges to deal with regarding abrasion alone; if the concrete is in a constant state of weakening, then the concrete never stood a chance in a tipping floor environment.

The Epoxytec 17G system is not cementitious, nor porous. Rather, the system is a sealed, non-porous specialized epoxy-based solution. Unlike cementitious materials, Epoxytec 17G exhibits epoxy resin-based chemical resistance, and is immune to a saturated weakening surface effect. Using a sealed system that shields corrosive byproducts from the garbage piles also adds the benefit of protecting any remaining original sound concrete underneath the 17G epoxy barrier slab, further extending the structural life-expectancy of the area. 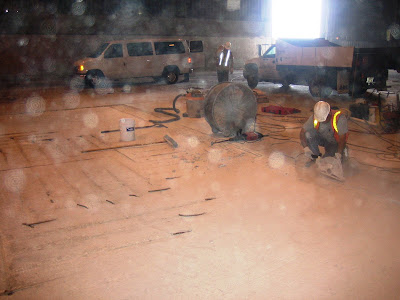 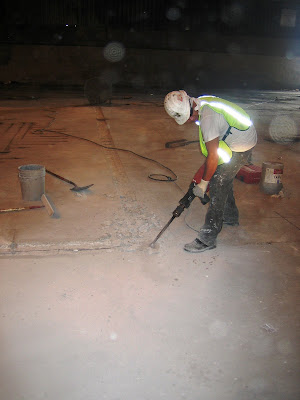 To prepare for the Epoxytec 17G application, it was recommended to first undercut a transitional edge so that the material would float flush with the original concrete areas not to be coated at the time. This way when the bulldozer blades are lowered and begin scraping, it would not hit a awkward impression or lip from the 17G installation. 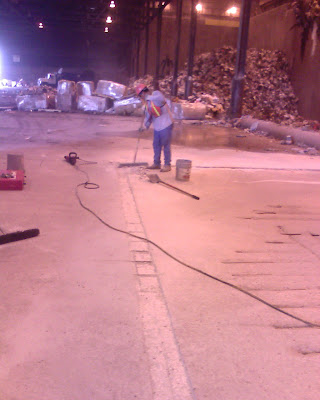 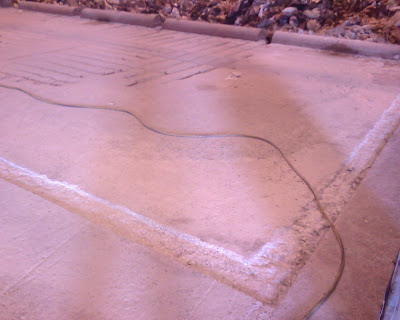 Because Wheelabrator South Broward could not shut down the entire floor, Wheelabrator specified the installation of the Epoxytec 17G epoxy flooring system in sections. After completing the undercut transition edges, the material application could start. 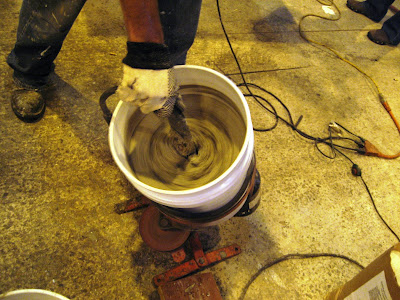 Mixing the Epoxytec 17G.
An additional criterion Epoxytec considered during its recommendation, especially in Wheelabrator’s case, was to improve maintenance cycles (while realizing the roll of maintenance is essential for longevity, but needs to be practical).
Epoxytec met the challenge by providing the ability for 17G to be easily repaired in a short amount of time, requiring simple tools and quick
In Epoxytec’s opinion, the tipping floor area needs to be inspected on a cycle (which is a great practice for the long haul), perhaps every 12 months (more or less). Rather than recommending a system that requires complete shut-down and curing limits of days or weeks, Epoxytec 17G can be serviced or repaired in short time, cured quickly and returned back to service fast. Therefore, being realistic, if scores, dings, or other unforeseen abusive compromises took place that are isolated, rather than waiting until the end of the maintenance cycle to address it.
Epoxytec repair solutions involve simply identifying the area of concern and supplying a repair kit (requiring one or two men, with simple tools, i.e., spatula to pour and spread) to patch and tie the system back in. This practice prevents further large scale problems from potentially occurring and extends the service life of the entire system, while allowing normal production and preventing operational down-time.

One of Epoxytec’s goals were to shift the maintenance cycle from the costly downtime of rebuilding concrete (slow process, long down time) to servicing the coating system with easy repairs that are fast, simple-to-apply, and quick curing for rapid turn-around and overall better performance. Doing this will be a key to a long-term successful and protective system. 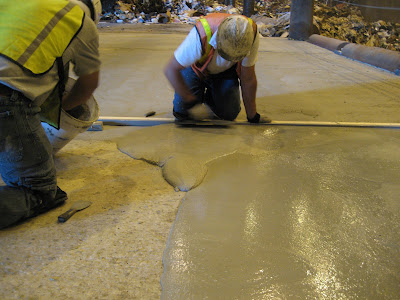 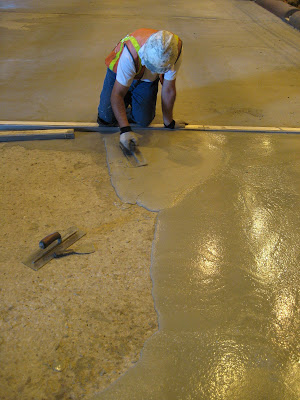 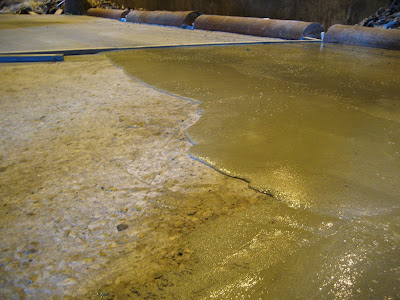 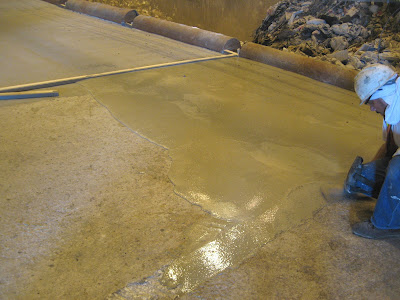 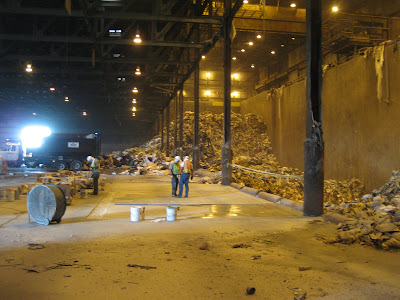 The first section to be installed is directly before the refuse bunker. The section experiences the worst wear and is considered a priority repair area for the 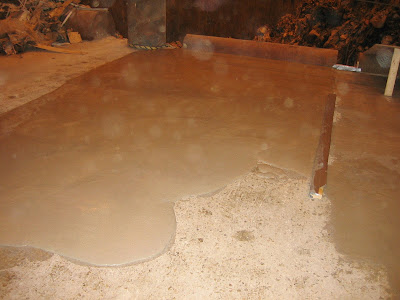 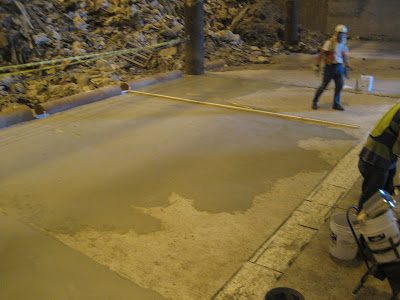 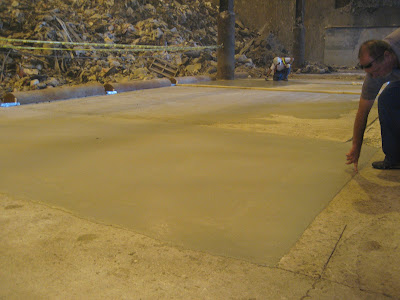 Using the undercut method as describe previously, provided a flush transitional edge to minimize any impact. 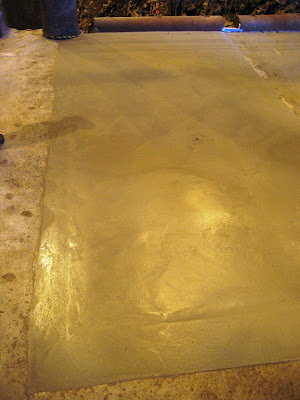 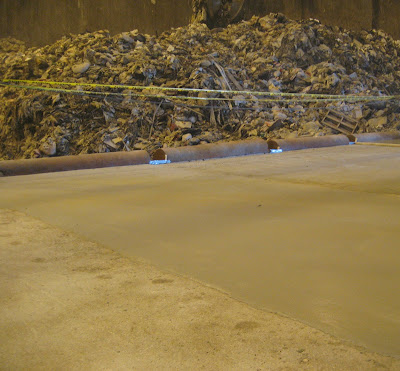